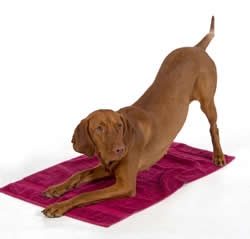 This webinar was great! Please click here to view or purchase the recording.

From the back of Jo-Rosie's book, Real Dog Yoga:

Yoga is defined as the stilling of the senses. It is a practice which involves people taking and holding specific postures, focusing on the present, and working on physical stimulation as a pathway to still themselves mentally. Real Dog Yoga shares the same aims [but for dogs], as well as improving focus, body consciousness, and dog-human connection.

If you have already purchased this presentation, please log in with the user info you created.

TOPICS: This webinar is focused on some of the aspects that are beyond the postures discussed in Jo's book. She'll go into mat work and how to create training dialogues. She hopes to discuss the following points in the seminar (subject to change):

This is a lot of material! If we happen to go long, don't worry, as it will be recorded. But I'd suggest setting some time aside afterwards, in case it does go long.

Jo has enjoyed working for The Blue Cross and also The Company of Animals before she started her company School4Dogs, which has 5 trainers and covers East Sussex in the UK. As well as being the recommended behaviourist for many rescue centres and vets, Jo also works as an expert witness for the courts in dangerous dog cases.

Along with numerous magazine articles and radio appearances, Jo has written a book about Calming Postures (called The Real Dog Yoga) which is available through Amazon and also Dogbooksonline.com in both English and German. She has also committed to two further titles with the same publishers.

She has lectured internationally including at the Dog Event in Paris earlier this year and also lectures for the Institute of Modern Dog Trainers. In her spare time, Jo enjoys clicker training lots of animals from ponies to chickens. She uses her own pit bull, Vizsla and Border Collie, chickens, Falabella pony and her Bengal cat for TV and filming work. Animal Actors represent the animals. She has done work with Vogue magazine, Cosmopolitan, GQ, Topshop, adverts for Channel 4, BBC and ITV along with short films, two comedy series for ITV and a BBC short film.