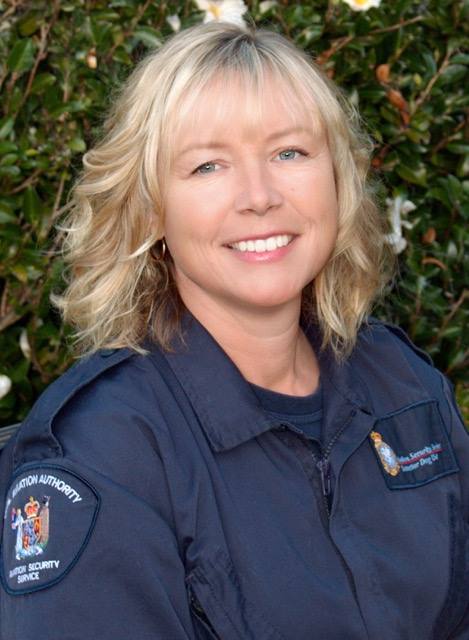 "I'm excited for this interview. After I taught a BAT seminar in New Zealand, I was invited to see Monique's canine bomb detection unit in action. It was so fabulous to see dogs trained to do that job with positive reinforcement. Monique and her team do real, important scent work at the New Zealand airport. To make the dogs and handlers more effective and happy, they stay on top of the latest techniques ." - Grisha

Monique worked as a Narcotics Detector Dog handler for 12 years with the New Zealand Customs Service. She worked with two dogs; her first was a labrador from the pound called Lucky and her second dog was a German Shorthaired Pointer called Chess (she was black with white spots)

Monique has now also worked for the New Zealand Aviation Security Service (basically same sort of functions as the TSA in the US) for nearly 10 years, first as a dog trainer, then as the National Standards and Training Manager and now as the National Manager. She has trained numerous dogs and handlers. She was instrumental in convincing the New Zealand Aviation Security Service to change its training methods from force based to reward based marker training approximately 5 years ago.

Monique has run numerous marker/reward based training workshops for the Aviation Security Service handlers/trainers and those of other agencies including, NZ Police, Corrections, Customs, Urban Search and Rescue, and Mobility Dogs. Dr Susan Friedman has been an inspiration to Monique and a great help to the New Zealand Aviation Security Service. As part of their training, their handlers complete the "Living and Learning with Animals" course that is run by "Behavior Works," Susan's company. Susan has helped them develop their own internal training system. The feedback from the handlers is very positive with a much better response from the dog and a great bond between dog and handler.

Outside of work, Monique loves to ride and play with her horses. She also coaches people in reward-based training of their horses.