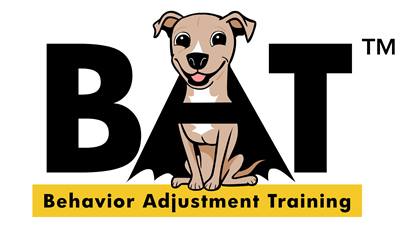 I was surprised to hear that there is still at least one Facebook group that doesn’t allow discussion of Behavior Adjustment Training (BAT) because of where they place it in the Humane Hierarchy. I’d post in the group directly, but I was banned years ago for daring to talk about BAT and besides, it may not be the only group that hasn't gotten around to updating their rules. So I wrote a Facebook post and I'm sharing here in my blog for posterity.

While I think it’s great for a well-informed group to take a stand to encourage humane protocols, the key point is ‘well-informed.’ I’d like to help anyone with outdated information get an accurate look at BAT.

Certified BAT Instructors are required to adhere to the Least Invasive, Minimally Aversive principles of training and Joint Code of Ethics published by the CCPDT, IAABC, and the APDT.

BAT is used for many species, especially dogs with fear, aggression, and even frustration. It promotes learner agency, fosters better communication, and improves the well-being of all involved; as such, discussion of BAT should not just be allowed in modern dog training groups, but actively encouraged. I’m grateful for the many dog trainer groups that discuss BAT as a go-to method for reactivity.

BAT 2.0 lives in the least intrusive parts of behaviorist Susan Friedman’s Humane Hierarchy. I recently taught a seminar at ClickerExpo on the Evolution of BAT, where Susan re-verified that classification before I spoke.

At its core, BAT 2.0 is a systematic desensitization protocol, but it improved on the standard model used in dog training in many fundamental ways. I’ll focus on one aspect that I think might be causing confusion: in BAT, the learner has behavioral control over interaction with the environment, including exposure to the trigger.

Susan says that any time an animal has the power to say no, it is an R- process.

Wait, what? Empowerment to say no is negative reinforcement? Should I be worried?

No. There isn’t a conflict here. She’s saying that opting out is an R- *process*, not an R- *procedure*. If whatever situation they behaviorally said no to was avoided, reinforcement can happen. But that learning process isn’t the problem: the power to opt out usually improves quality of life.

Being able to opt out of things one doesn’t like or feel safe with doesn’t cause fallout. It’s actually really good for well-being to have control over the unpleasant aspects of life. That’s a healthy part of listening to our dogs.

Fallout comes from negative reinforcement *procedures*, where a trainer presents an aversive and requires a certain type of behavior before the aversive is removed. The presentation of the aversive, not the dog’s control over it, is what causes distress. With shock, for example, it’s shocking them in the first place that is a concern.

Being able to say no to something in the environment is naturally occurring negative reinforcement (NOR-). It is not a procedure. It’s just inherent in NOT taking control away from the animal. BAT doesn’t live with the R- procedures the Humane Hierarchy with the big speed bump and all of the fallout. In fact, NORs (positive or negative) aren’t on the hierarchy at all, because the hierarchy is for deciding whether administering a procedure is humane or not. By definition, trainers don’t administer NORs, they occur naturally.

NORs (positive and negative) are how dogs learn social skills in the first place. The only way to avoid NORs entirely would be to not let dogs interact with the environment.

In BAT, we create set-ups that foster curiosity, and the goal is to have the dogs be interested in things, not avoidant. Dogs explore the environment, including the trigger at a safe distance. They are always allowed (and sometimes encouraged) to walk away from a stimulus: for any reason, at any time. With BAT, the other dog or person soon becomes no longer something to avoid, but something to interact with for its own sake. That’s how BAT really shines: gathering information, feeling safe, and learning that they actually enjoy interacting with what they used to fear.

[Note: BAT isn’t just for fear, it also works to help dogs calmly interact with what they used to become over-aroused by.]

BAT empowers dogs to use their behavior to feel safe and we are very mindful to avoid accidentally taking agency away. The NOR- that shows up in BAT just comes from giving the animal the power to opt out, even when it was usually his own curiosity that brought him into a situation in the first place.procedure

Generally, we follow dogs around on a loose leash, allowing their curiosity to lead. Dogs may show interest in the trigger and then walk on because they are satiated (have enough info) or they may be moving away to a more comfortable location. Our main task is to keep them from getting too close before they are comfortable and skilled.

BAT trainers protect the dogs’ ability to escape at all times in set-ups, and as much as possible in everyday life. That’s the naturally occurring reinforcement I mentioned above. Control is a primary reinforcer and promoting agency is humane care at its best. As such, it’s part of pretty much all modern dog-friendly protocols, but we are extra careful of it with BAT and I believe empowering the animal is one of BAT’s strengths.

Giving the dog the option to move on or away is not just acceptable, it’s an essential part of humane training.

I’m extremely grateful to the trainers who put the time into learning BAT and applying it creatively to a variety of situations and species, who have helped BAT become more and more mainstream. I continue to be inspired by the stories of the safer, more joyful, larger lives that people have helped their dogs enjoy. As a humane system that encourages two-way communication and empowers adaptable, confident behavior, BAT 2.0 can be a valuable part of any modern trainer’s toolbox.

p.s. Please feel free to share this blog post in any groups that you’re in. I would be happy to be part of a respectful conversation if anyone is curious about it.

My new site is LIVE!

I have a shiny new website with really comprehensive membership plans. When we are done shifting content over to the new site, you'll be able to access all of the courses you bought here on the new site. Many have already moved.

If you have an account on this site, you also already have one on the new site. You will just need to create a password